Give the Gift of YIPE!

Kids make their wishlists without any care for how realistic said hopes are given socioeconomic trends and their tax bracket.  It doesn’t matter if they get a jet pack or a ray gun or a nuclear-powered arm cannon.  The important thing is, for a brief moment, they think they might. 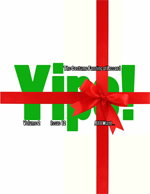 Even if it’s just for a fleeting moment, a kid’s mind opens up to the vast universe around them.  Maybe it’s possible for a decrepit, morbidly obese man to harness a team of faster-than-light ruminants to distribute roughly 18 billion presents across the entire globe in less than 12 hours.

Sure, Kevin wants a Jet Pack, Ms.Sheriff wants a Ray Gun, I want the power to crush skulls between my cruel digits, and Mette wants everything all at once… but are we going to get them?
Does it matter, as long as we WANT them in the first place?